Xiaomi Mi Box S has come in full 4K Ultra HD. Perhaps this may be the answer to all your streaming needs? With a sleek form factor and packed full of features, would be cord-cutters might have just found their heaven-sent answer in practical form. True to Xiaomi taste and design, we have got one sexy looking box coupled with excellent software support right out of the box. Check this mi box s review.

Xiaomi Mi Box S is the big brother of the modest but value-packed Xiaomi Mi Box. Where the Mi Box fell short, the Mi Box S picks up the baton and goes the full extra mile in terms of features and support. So, let’s see if this does take the cake from its predecessor and improve on its shortcomings.

The Mi Box S has a fairly simple design, it’s just a rectangular box with rounded edges made from plastic. The argument for its boxy nature is a larger heat sink that dissipates heat from the internal hardware much better. You have power, audio-out, USB drive, and HDMI 2.0a ports around the back.

There’s no dedicated Ethernet socket, but it has a newer 2×2 MIMO Wi-Fi ac module that does a much better job of staying connected to your home Wi-Fi. There were a few hiccups with Wi-Fi access on the Mi Box, but that has never happened with the Mi Box S, it had a stable connection the whole time.

Xiaomi Mi Box S doesn’t look bad though it’s a little dull. The box is rectangular, with roughly 3.5 x 3.5 inches or 10 x 10 cm in. You can find the Xiaomi logo at the top of the unit, while there is a standard HDMI port, a USB port, a 3.5 mm audio port and a power port at the bottom. The system, in general, is certainly minimalist but that is not inherently a bad thing, of course. 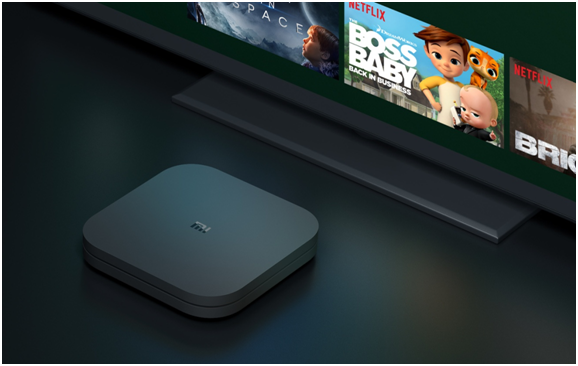 Not as hard as you would think

The Xiaomi Mi Box is so easy to set up physically, as you would imagine. Just add the port of the HDMI to the TV or receiver, attach power port to an outlet, and you’re expected to be done. Put the batteries in the remote, turn your TV and computer on and follow the prompts on the screen.

You will be asked, like every other Android user, to sign in to your Google account and ask for privacy preferences. When you have devices that are Android-based, Google also looks at your account’s settings, and suggest those that you should add to the Mi Box S, help to speed up the process of customizing the device to your needs.

The Mi Box S can look a little bland, but the setup is simple enough for those who have tried to set up an existing Android system before. Though you may want to go to the Settings section and make sure that the box has the highest quality video output that your TV can handle.

The Xiaomi Mi Box S might be inexpensive but that doesn’t mean features are lacking. This streaming box is 4 K, with HDR support.

In addition to enabling high-resolution video, the Mi Box S also integrates Android TV 8.1 right into it. What that means is you’ll be able to take advantage of the apps’ massive ecosystem of Android TV, plus features such as Google Cast, the capability to reflect your Android phone, the Google Assistant, and more.

Android TV also lets you navigate a wide selection of games. There are the obvious ones, like YouTube and Netflix, but there are also a variety of games and lesser-known apps, like Google Assistant, that might be helpful.

You are getting a new remote with dedicated Netflix buttons and Google Assistant activating it. By issuing voice commands, the Assistant interface enables you to easily launch TV shows or play videos on YouTube. The layout itself is the same as what you will find on any Android TV device, and you will have access to the Play Store to download thousands of TV-optimized applications.

Not the best out there

Though it won’t please many gamers, it’s still a good streamer. We noticed that this was more than perfect enough for services like YouTube and Netflix. Yeah, more performance-intensive tasks will cause the Mi Box S to fail, but at this price point, that’s what you’d expect to happen.

Besides a few lingering performance problems, we also had a couple of issues with the remote. The remote often wouldn’t turn the Mi Box S on, and it couldn’t activate Google Assistant when we set it up first either. Resetting it solved the issue but in the first place, it should not have been an issue.

Typical Xiaomi ecosystem pricing, not cheap, but value for money

As per this Mi Box S review, sadly, this is not the one. The remote is a fantastic new feature, and aside from the fact that it doesn’t handle 4 K content, I didn’t have any issues with the Mi Box S. If you’re looking for a streaming device that plays 4 K HDR content efficiently, then you’ll have to look elsewhere.

A lot is going on with the Xiaomi Mi Box S but it’s not great. If you are searching for an Android-based streaming box and don’t want to spend too much, this is a good tool to go for, but you’ve got to be prepared to take in with minor bugs, a remote that doesn’t always work perfectly and you can’t use it for too many high-performance tasks.